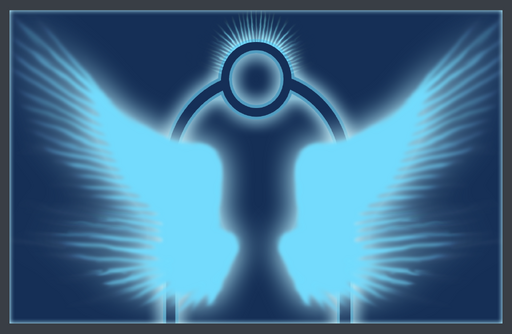 In the beginning, The Light Maiden was granted dominion over all The Twilight. A very prestigious responsibility. It was her task to watch over all the good energy of the universe and in times of need offer it to those who seek it. Originally this energy floating around aimlessly as either wisps of wind or bouncing light. At first The Light Maiden would patrol back and forth across the gates, ever vigilant and cautious, but grew tired of the monotony after centuries past. Bored and curious, she ventured into the energy and sensed within it a desire for laughter and to be more than it was now. She claims, to this day, to have thought long and hard about her next action, but others have said they felt the shift in the universe happen much faster than that.

Having resolved herself to follow through and help the universe, she stood at the base of the gate she had been guarding. The Light Maiden raised her hands and spoke, "You are the best of each of us. You deserve more than anyone to be in the form you desire most." Her wings unfolded and beams of blue light exploded across The Twilight. She felt more power than she had ever before radiating from her reacting with the energy of the universe. As the last ray of light dissipated, she looked out over her dominion to witness the true form of the positive energy of the universe and she saw a sea of blue bears staring up at her. Their pudgy tummies and bobble heads jiggled as the horde called out in unison, "Ha Ha Too Slow!"

The following moments were complete chaos. The Light Bears were causing mayhem in every direction; they were jumping and dancing and kicking each other off walls. The Light Maiden tried to calm them all down, but anytime she would catch one, ten more would run past knocking her over. Eventually she gave up, slumping down on to the stone steps. She let out a defeated sighed just as a "heehee" sprang up from in front of her; looking down she saw it was one of the bears who quickly ran away giggling enthusiastically. She glanced out and saw all the bears laughing and playing. They were happy, truly happy, and it finally dawned on her that this was exactly what the universe wanted.

On the other hand, those who commanded The Light Maiden were not as happy about the situation as the mischievous Light Bears. After much deliberation and research, they concluded there was no way to reverse what had happened. In truth, The Light Maiden only acted as a conduit for the universe and if this was what it really wanted, there was no point in arguing. As the saying goes, the universe will always find a way. They did however punish the Light Maiden with having to do all the dishes for a month.

Life since then for the Light Maiden was no longer boring to say the least. Her days were filled with playing and laughing with little Light Bears as they ran amok in The Twilight. Honestly I don't think she would have wanted it any other way.

The Light Maiden doesn't know much of what happened immediately following the infection of the Shadows. The moment of The Uprising when Vir De Somnio broke through the veil between their worlds, Shadow Tendrils reached up from the ground surrounding her. She became entombed by them, still alive but unable to move or speak.

Fear set in almost instantly. Not for her own safety, but rather for the safety of all the Light Bears now left unprotected. The cascading consequences if anything happened to them would be dire. She struggled to move even an inch within the pitch black coffin pulsating with anger and hate. Mustering all her remaining strength and will power she called out for help, but when no one responded the feeling of despair became overwhelming. It could mean only one thing, something had happened to the Light Bears and the universe could no longer aid those in need.

Her eyes welled up with tears as thoughts of the absolute worst things raced through her mind. "Have you given up already Light Maiden?" A familiar booming voice echoed in her mind. "The Light Bears need you, as do we all." As the last word was uttered, she felt an immense power building within her.

We now know this was the remaining energy of those in The Light Maiden's order, given to her to help the Light Bears win against the Shadows and in turn save the universe from the pit of despair Vir De Somnio so desperately wanted to create.

Although still confined to her dark crypt, she used the new found power to aid the Light Bears any way possible: Pools of Light for them to escape into, Bear Sentry Statues to hide in and Blessings to help make them stronger. For every Light Bear who escaped The Twilight she could feel the tendrils shiver in response. It was working and it was only a matter of time before she would be strong enough to close the cracks in the veil.