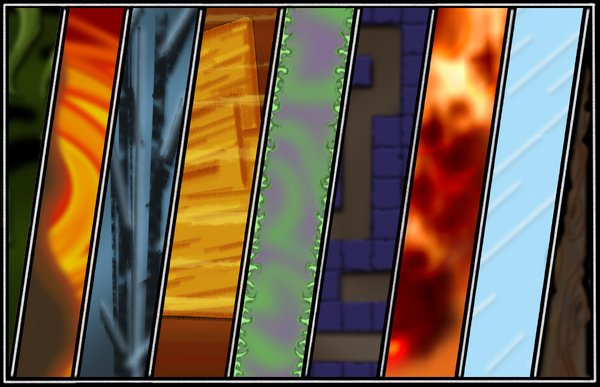 The bright scorching sun burns down on the desert sands of this plane. Its surface marred by the great flakes of flaming rock falling down from above. The sky is filled with streaks of smoke and fire hurling towards the ground. Shards of glass extend from the craters left behind, frozen in place by the instantaneous nature of their creation. Light refracts endlessly off the mirrored surfaces never letting a sliver of shadow to exist.

Anyone caught in this hellish landscape feels the their eyes burning and weeping from the overwhelming brightness. The blistering sun burns and peels the skin from the body and the dredging through the course hot sand scraps and sears whatever touches it.

Towering plateaus cover the wasteland of this plane positioned in such a way that violent storm winds gust across its surface unrelentingly. Any vegetation that might have existed here has long since been ripped out. The rocks of the plateaus erode against the force of the wind causing visibility to be hindered by the shear volume of dirt and dust whipping through the air. Someday the wind will win the fight and nothing will exist, not even the plateaus.

Inhabitants of this plane are subject to the will of the wind. Either they are taken up into the air to be thrashed around or they try to hold on to something and the wind rips at them slowly. In truth the wind always wins, its just a matter time.

Necrotic trees and twigs jut out of the putrid slushy surface of the black bog. The surface tension is broken thousands of dagger like ice shards raining down from the grey cloudy sky above. The air is cold and a thick fog settles just above the surface fearing to touch it. Anything that dares to touch it is drawn down into the dark quagmire forced to slowly suffocate. If you listen closely enough, you can hear the muffled sounds of previous victims.

Only a few safe places exist so those forced to live on this plane are trapped where ever they are by the deadly bog. That is, unless they would prefer to be strangled by the bog.

The aged castle of this plane looks over an ancient ghost village filled with fluttering mystical lights. Within its suffocating stone walls the castle is a labyrinth with corridors that twist and turn, overlapping endlessly. Lit by only the flickering flames of mounted torches its no surprise that no one has ever escaped the castle. Its halls move and shift changing its layout whenever it feels like it.

With each passing step any inhabitant is weighted down by the feeling of loneliness that lingers in the castle. The only friend they know is the cold and piercing wind. Unaware of the castle's preference for shifting corridors, they always think the next turn will hold the exit.

Destroying everything in its path, a winding river snakes through decaying plant life shifting its course erratically. The river is alive and hunting, searching for any sustenance it can find. A debilitating stench of death and decay wafts up from is surface and its waters are powerful enough to shred the flesh off any living creature. Nothing can escape its twists and turns. Eventually the river will coil itself around its prey and feast.

With no trees or other raised ground, anyone who walks or scurries will be consumed. Flying creatures can survive longer, but cant life forever if they have to always compete against a more cunning hunter for food.

Tombs covered in green flame float in spherical patterns around gold and marble columns. Each sarcophagus is carved from solid stone each depicting the face of man in anguish. Light filters down past large clouds in streaks of radiance. Guarding the tombs and their inhabitants, are hundreds of floating eyes each darting and dashing from one tomb to the next making sure no one escapes.

The pour souls within the coffins are engulfed in eternal flame. Their fated to be burned fully conscious until the fire turns them into dust feeding off their pain and suffering. If anyone tries to escape, even to jump into the abyss below, the guardians stop them.

The gnarled woods of this plane appeared suddenly and since that day countless creatures have gone missing. The trees are alive and the forest must feed on the force of living things to sustain itself. Nothing green grows and the forest floor is covered in a creeping black moss. The edge of the wooded area has tree limbs curled and wrapped around each other creating an almost impenetrable wall.

The thick and twisted branches reach out to anything moving nearby and grapple it burrowing vines into it and leeching the life from it. Once consumed the creature becomes a part of the forest reaching out for the next victim, essentially completing the cycle.

Single occupancy rot-iron cages swing helplessly only a few inches above the molten lava residing just below the shifting surface of this plane. The sky is blackened with dark clouds not letting an ounce of light pass. Ash and flakes of fire linger in the air. Schisms and slits randomly appear, bursting through the volcanic crust. Lava erupts out of them from deep within the magma core

Typically those who occupy this plane are trapped within the tiny cages unable to escape when the fire explodes out of the ground beneath them, ceasing their existence. For those too big for the cages, they are chained directly to the ground.

The frozen lake, seemingly never ending, covers every inch of this plane. It is completely smooth save for a few glaciers extending above the surface. Deep below the once densely populated waters have since been emptied. With each passing year the ice becomes thicker, eventually freezing every inch of liquid water on the plane. The ice itself is sentient and loves a good pun.

The first and only rule for surviving in this plane is: Don't Stop Moving. If you do the ice will consume you, petrifying your body in the ice for eternity.