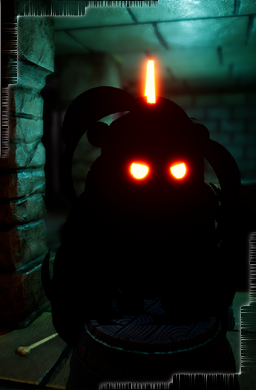 Shadow Bears are the helpers in Light Bearers who started out the round as a Light Bear and was infected by the Shadow. Every Shadow Bear is given a primary ability to place a Shadow wall down and in Shadow Favored servers they can also get awarded a movement speed increase if they disable a Blessing Pad. Once converted into a Shadow Bear, their goal is to help the Shadow prevent any Light Bears from escaping. You will lose a lot of points for being cleansed, so once infected it is in your best interested to help the Shadow win. Shadow Bears will be forcefully cleansed at the end of a round once a Light Bear reaches the Pool of Light, or if in Shadowed Favored servers if the last Light Bear reaches the Pool of Light.

After The Uprising, Light Bears were being infected by the Shadows who found their way into The Twilight. The Light Bears good nature made them gullible and unaware of the intentions of the Shadows resulting in the creation of Shadow Bears.

During the transformation between Light Bear and Shadow Bear an interesting chemical reaction happens within the bears energy converting their joyous gleefulness into devious gloom. Their skin darkens to a charcoal black and bits of them glow bright red. They start acting abnormally: chanting, running sluggishly and telling outright lies about how great being a Shadow Bear is. If you or a Light Bear you know ever comes across one of these, run and don't look back.